with mutton chops. At his birth, his Mother cried and the preacher passed out. He was raised in a lion's den and tamed those nasty beasts by the age of three. He grew up pursuing the most noble of causes, life as a professional disc golfer. In his spare time, he’s an architect.

Upon winning the quad-fecta of glow, safaris, the event, and the respect of all who marveled at his achievement, Dan, Spence, and Nina presented him with the first disc golf mini emblazoned with his catchphrase ‘Don’t Fuck with Papa Chuck’. It was in this moment a legend was born.

Though he has no children of his own, Papa Chuck is often sought out as a father figure to share his sage advice on life, love, and the pursuit of awesomeness.

Papa Chuck isn’t the father you have, he’s the father you need. On the disc golf course, he is quick with a lesson, providing his own kind of wisdom, quick-witted dad jokes, and an ice-cold beer. He’s an old-school player who keeps an even keel. Whether throwing his old-school Discraft Hornet or sinking a putt no one else would attempt.

Off the course he maintains a live music schedule so packed full of shows, Ticketmaster can’t keep up.

Time waits for no man. Unless that man is Papa Chuck.

If you spell Papa Chuck in Scrabble, you win. Forever.

When Papa Chuck throws an ace, doves and unicorns sing the Macarena.

Papa Chuck can dribble a disc, without using his hands.

Papa Chuck never gets lost. Because he is the center of the universe.

Get your Papa Chuck gear to celebrate the greatness that is Papa Chuck. Proceeds benefit Papa Chuck and his lavish lifestyle of hard cider, velour jumpsuits, amazing dance moves, and caged lion matches.

Most of all remember, “Don’t Fuck With Papa Chuck!”

Let customers speak for us

Defiantly geared more for someone that has dialed in their bag as apposed to someone starting out wanting to carry a wide verity. That being said, I'm just starting out and i still love this bag!

My brother is an avid disc golfer. He helped me pick out this bag from your company. 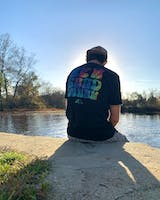 Papa Chuck is my hero. That man is a legend in more ways than one! Great merch!!

I have low back problems and need to be very careful how I carry my bag. I love the hip belt because it moves the weight off my back and onto my hips. This is the only high quality bag with a hip belt! The bag is light with plenty of room for anything I need for a round.